The first of many thousands of new trees and shrubs are being replanted across Widnes and Runcorn starting this week, in a massive project to reinstate some of the landscaping across the area around Mersey Gateway Project sites.

Native and evergreen trees and shrubs, including English Oaks, Silver Birch and Field Maple, will be planted alongside Scots Pine and Black Pine to ensure year-long greenery. 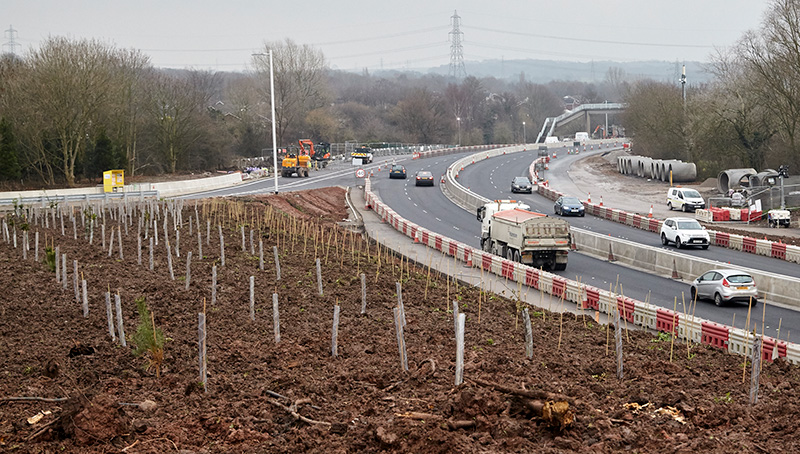 Hugh O’Connor, General Manager of Merseylink, said the landscape reinstatement was a sign of Merseylink’s commitment to ensuring the project had a positive impact on the local environment.

He said: “As with any large-scale infrastructure project, work to build the Mersey Gateway bridge and associated road network has involved some extensive landscaping work.”

“From the start Merseylink has planned to restore and replant extensive areas around the project sites with trees, shrubs, wildflowers and grasses, to ensure local wildlife can thrive. We’re delighted to report this replanting work is now being delivered.

“When complete the landscaping scheme will have replanted more trees and shrubs in the area than were initially removed.”

Planting began this month and will continue until the planting season dictates.

Environmental issues have been a key focus since the project was first developed.

An independent charitable trust – the Mersey Gateway Environmental Trust (MGET) has been set up to promote the conservation, protection and improvement of the environment across a 1600-hectare area of the Upper Mersey Estuary running all the way from the Mersey Gateway Bridge up river as far as Warrington.

The Trust is also aiming to create a new 28.5-hectare nature reserve around the bridge.

Victoria Pollard, Merseylink Environment Manager said “The replanting scheme will provide massive ecological value to local wildlife. Motorists will notice the new greenery as we approach the spring, and more and more of these new trees and shrubs begin to grow.”

Cllr Rob Polhill, Leader of Halton Borough Council, said: “The replanting of many thousands of trees across the borough is a significant step for the project.

“Preserving and improving the environment is a strong aim of the  Mersey Gateway Project  and it is fantastic that we are now beginning to see landscaping taking place across the borough.

“The replanting of trees and shrubs will benefit wildlife and will be enjoyed by local residents too.”