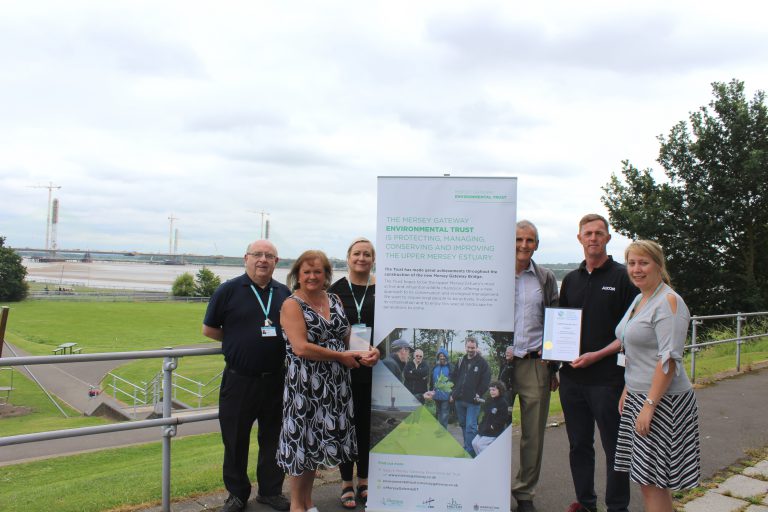 The project team triumphed in London yesterday (Wednesday 21st June) in the stakeholder engagement category at the Chartered Institute of Ecology and Environmental Management (CIEEM) Best Practice awards, and was also highly commended in the knowledge sharing category.

Dr Mark Hampton, the project’s lead ecologist, said the awards recognised the highest standards of professionalism in environmental management across the project site and from Merseylink and its partners AECOM and the Mersey Gateway Environmental Trust.

“Preserving and improving the natural environment surrounding the project and wider areas was a priority from the beginning,” he said.

“Winning this award is great – it really demonstrates the work the whole team has put in to engage with environmental stakeholders is the gold standard.”

To win the Mersey Gateway team had to demonstrate how it met a number of criteria, including how sensitive environmental issues were resolved.

“We demonstrated how we had worked with regulators to ensure the construction of the haul roads on the saltmarsh at the start of the project did not interfere with bird nesting season,” he said.

“Throughout the project we’ve taken steps to ensure transparent and timely access to information for the project stakeholders such as Natural England, the Environment Agency, the Marine Management Organisation, the Local Planning Authority and research institutions.

“We’ve made it our priority to inform, consult, involve and collaborate with these organisations, but also to foster interest and engagement from the local community.

“This is done through community engagement events, the establishment of volunteer groups and working closely with local schools to promote the project’s environmental benefits.”

“I’d like to say well done to everyone involved. This is recognition of the extremely high standard of work that has been demonstrated from the project team since this project began,” he said.