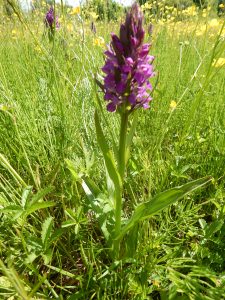 The Upper Mersey Estuary is home to many plant species of interest. One Local Wildlife Site in particular, on the bank of the Manchester Ship Canal, is especially notable for its orchids. Bee orchid, fragrant orchid and marsh orchid spp. have been recorded here since 2010. The orchids and other flowering plants at this site support a variety of invertebrate populations, including a diverse butterfly assemblage.

Orchids are highly specialised plants, and require specific conditions in order to survive. It was therefore a concern how these species would be effected by the construction of the Mersey Gateway Bridge in 2014, which is in close proximity to the site. Requiring sunny habitats and moist soils, it was considered that orchid growth under the line of the bridge and its casting shadow would be inhibited. To mitigate this risk, a programme was put in place to ensure the viability of these plant populations: seeds were collected in order to provide plants for translocation back to the original site post-construction, orchid turf was removed and translocated to a new site nearby, and individual orchid plants were removed and translocated to Norton Priory as a back-up measure. In the last few years, however, there has been a change in species composition and an absence of all orchid species within the site. This is where Mersey Gateway Environmental Trust (MGET) did some investigation to identify the reasons for the disappearance.

Site before and after clearance

Orchids and their seeds can lay dormant for long periods of time until favourable conditions are met again. This is especially true in young grassland and restoration sites where the soil biome must mature into suitable growth conditions, and the presence of competitive species can inhibit orchid emergence. We found that a dense layer of bryophytes now covered the surface at the site, potentially suppressing orchid growth. Bryophyte and scrub clearance was undertaken in May 2019, and in March 2020 with agreement from Peel Ports, which resulted in the return of a small number of orchids soon after. The Mersey Gateway Environmental Trust continue to manage the site through monitoring, periodic scrub clearance, and bryophyte scraping, in order to further regenerate it to a more favourable condition for orchid and grassland species growth.